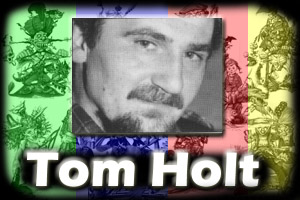 Biography of the author Tom Holt


During the 1990s there was a complete boom starting within the genre of sf/fantasy. Whatever reasons there might be for this sudden interest in the genre, it has made those of us who enjoys this genre quite happy. Within humorous fantasy there havn't been that many famous authors, in the eigthies the names one related to the genre was Robert Asprin and Terry Pratchett. In the later end of that decade a British man by the name of Tom Holt got a novel by the name Expecting Someone Taller published. This was the first novel in his series of humorous fantasy, he has now published twentysix books, of these fifteen are humorous fantasy and are well worth reading if you have the slighiest interest in this genre.

Tom Holt (i.e. Thomas Charles Louis Holt) was born in London on the 13th of September 1961, and studied at Westminster School, Wadham College, Oxford, and the College of Law. He produced his first book Poems by Tom Holt, at the age of thirteen, and was immediately hailed as an infant prodigy, to his horror. At Oxford Holt discovered bar billiards:

"When i was at university there was a pool table in the room behind the bar. We found that if we stuffed newspaper in the pockets, we could play all day for free. So we did, when we should have been working. The result of all this indolence was that when we came to take our final exams, the boys & girls who'd avoided the bar and stayed in the library working like hell all passed with flying colours; while the rest of us, whi'd done nothing but play pool and have a good time, also passed with flying colours. So let that be a lesson to you."

and at once changed from poetry to comic fiction, beginning with two sequels to E. F. Benson's Lucia series, and continuing with his own distinctive brand of comic fantasy. So far he has published a whole bunch of books. Most of them are comic fantasy, but there are also historical novels, fictional novels, a biography, a thriller, one poetry book and a collection with his filk songs.
He is often compared to Terry Pratchett, but they write in quite different styles. A wild guess is that he has been compared to Pratchett simply because they both are British and write humorous fantasy.
If you are mostly interested in his humorous fantasy-novels, I would like to recommend Flying Dutch as a good start. That novel was the first one I read, and it is still my favourite.
The humorous novels are free-standing, so you can read them in whatever order you would like, although his first humourous fantasy novel was Expecting Someone Taller. The two historical novels Goatsong and The Walled Orchard were meant to be one book from the beginning and the new edition of The Walled Orchard contains both books. The setting is the fifth century BC.
Tom Holt has also collaborated with Steven Nallon on I, Margaret, the (unauthorised) autobiography of Margaret Thatcher.
Among his favourite authors are Damon Runyon, Ernest Bramah, and P.G. Wodehouse (in that particularly order). Thinner and more cheerful than in his youth, Tom Holt is now married with (surprise: his wife!) Kim, and lives in Chard, Somerset (UK) together with their daughter, downwind of the meat-canning factory. Since he is an amateur engineer, among those items that bring joy into his life is two major things: his Myford ML7 and Bridgeport universal mill, and with these fine lathes he produces (according to himself) huge piles of iron filings. Which, is not entirely true.
His interest in music is filk music, medieval musc, and classical jazz.
B. de Ventadour, G. d'Ussel and B. Marti (all french) are his three favourite bards from the 12th century.
As the (well, close to) perfect tool to write he uses a Pentium with lots of MHz, and Word Perfect 7 (it's not Microsoft, that is the most important thing). He has also gained an interest in Iaido, read some more about that martial art here.
Mr. Holt used to be a lawyer but in 1995 it was time for a more proper job and he begun to work fulltime as an author.

Lucia and Me: A Conversation with Tom Holt, from November 2012 about the E.F. Bensons sequels.
Dave Langford about Tom Holt
An interview from a fanzine called USS Beagle, which was run by Paul Bines.
Wendy Grahams's Interview, for the FTL magazine.
SFFWorld's interview from 2000
A Q/A with Tom Holt regarding the book Doughnut, over at RT book reviews

Myself, I started this page at the end of 1996, I had thought about doing a page earlier, simply becuase I couldn't find any information about Tom Holt on the net. Finally during the break at christmas I pulled myself together and made a few pages with the little information I could gather from the books and from bookstores. Some three week later I received an email from a gentleman by the name of Tom Holt. It took a few mails back and forth before I was fully convinced that it actually was Tom that was typing at the other end :)
During the last years I have addded bits and ends of information that I bumped into, and have gathered quite much information related to him. The pages have looked pretty much the same since the beginning, but in July 1999, after finishing my master thesis in computing science, I finally pulled myself together and made a complete make-over, I hope you enjoy the new pages and find them better structured.

All stories/filksongs is written by Tom Holt, and not by me.
This is a fan-page about Tom Holt, made by me,
Tom Holt is in no way responsible for whatever I put up or write here.